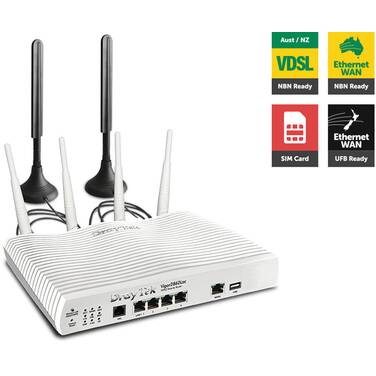 The Vigor2862Lac router has most of the functions of the Vigor2862 series routers, plus a slot for a 4G LTE mobile broadband SIM card. The supported SIM cards include those from the major broadband service providers in Australia, Telstra, Optus, Vodafone, etc., as well as those in New Zealand, Spark, 2Degrees and Vodafone with speeds up to 150Mbps downstream and 50Mbps upstream.

In addition to the 4G LTE mobile broadband, the Vigor2862Lac has other WAN interfaces including 1 x VDSL2/ADSL2+, 1 x Gigabit Ethernet WAN and 1 x USB port for a 3G/4G mobile dongle. With the latest Wi-Fi WAN feature, you can configure WAN2 to use the router Wi-Fi to connect to an external Wi-Fi hotspot.

The Vigor2862Lac can connect to the Internet through any of these interfaces, or with a combination of interfaces for Load Balance and Failover functions. Like the Vigor2862 series, this router supports business features including an object-oriented SPI (Stateful Packet Inspection) firewall, IPv6, 32 x VPN tunnels (including 16 x SSL VPN tunnels), tag-based VLAN, multiple subnets, etc.

For mission critical applications, the Vigor2862Lac router can be used in High Availability mode to provide uninterrupted network connectivity, if there is a hardware failure occurrence in the primary router.

The LTE feature makes the Vigor2862Lac series router an ideal solution for applications such as:

The Vigor2862Lac series router can be rack mounted using a 1RU rack mount bracket on a standard 19” rack or cabinet.