$9999
Add to cart
Question
*via redemption with Intel: (Click the below Banner for more information) 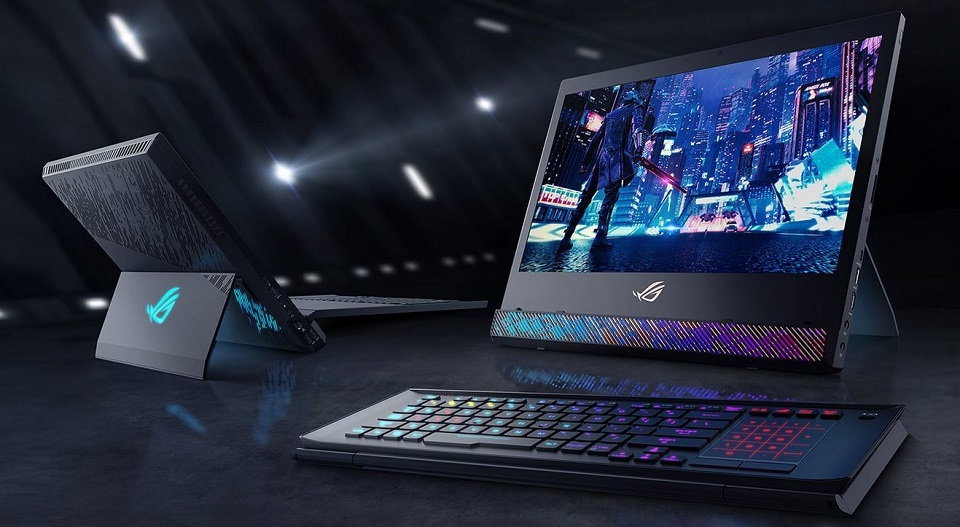 REDEFINE HOW YOU PLAY
Laptops limit cooling and lock you into a fixed position that’s needlessly rigid for desktop replacements, so we’ve reimagined the form factor to raise your game. ROG Mothership is a portable Windows 10 Pro powerhouse with an innovative standing design that enhances cooling for its factory overclocked GeForce RTX™ 2080 GPU and 9th Gen Intel® Core™ i9 eight-core CPU. Choose between G-SYNC™ displays with a detailed 4K resolution or blazing 144Hz refresh rate, and use the detachable keyboard to adapt to how you play. SSD RAID storage and 2.5G Ethernet bring ultra-fast performance to every part of this revolutionary gaming machine.
RETHINK THE FORM FACTOR
Each aluminum unibody is milled to perfection with a precise CNC machining process. The chassis stands tall to improve airflow and cooling, enabling a slimmer and more portable design. It leans back on a stepless hinge to suit any setting and separates from the keyboard for additional versatility. Detach and reposition the keyboard for your ideal gaming stance, or replace it with your favorite desktop peripherals. ROG Mothership can deploy on the road or power a full battlestation at home.
STAND TALL TO BREATHE DEEPER
Laptops have limited airflow because most intake is from vents under the chassis, where there’s little room to breathe, but ROG Mothership’s unique design inhales cool air freely from the back. Standing tall lowers temperatures by up to 14°C*, and liquid metal takes CPU cooling to the next level. Seamless switching between Scenario Profiles optimizes performance and acoustics for the task at hand.
*Unless otherwise stated, figures are based on theoretical performance. Actual figures may vary in real-world situations.
TAKE THE LATEST HARDWARE TO THE NEXT LEVEL
ROG Mothership raises the bar with a factory overclocked GPU and CPU that are unlocked for further tuning. The GeForce RTX™ 2080 boosts up to 1880MHz at 200W, and its 8GB of GDDR6 VRAM is clocked at 7200MHz, setting a new standard for laptop gaming and VR performance, while the 9th Gen Intel® Core™ i9 CPU unleashes eight cores and 16 threads on heavy workloads.* They’re paired with up to three NVMe SSDs in RAID 0, with two drives connected to the CPU to reach an insane 8700MB/s.
*Unless otherwise stated, figures are based on theoretical performance. Actual figures may vary in real-world situations.
Choose from the best IPS-level displays
Immerse yourself in gorgeous graphics on one of two beautiful 17.3” displays. Choose amazingly crisp and detailed 4K visuals with a broad range of rich colors. It has G-SYNC™ technology to deliver smoother gameplay with lower input lag and no tearing.
Turn up the Hi-Res Audio
Redesigning the form factor lets us arrange four speakers along the front edge to fire high-quality sound directly at you. ROG Mothership’s audio is powered by a premium ESS® Sabre HiFi DAC with Hi-Res Audio certification. Smart amplification lets you pump up the volume without damaging the speakers, while virtualization simulates surround sound for stereo devices like headphones and VR headsets.
Stay connected at warp speed
Free yourself from gigabit bottlenecks. ROG Mothership amps up networking with 2.5G Ethernet that lifts your LAN to the next level. Next-gen Intel® Wi-Fi 6 with Gig+ (802.11ax) surpasses gigabit speeds and offers higher efficiency and performance on busy networks. Patented ROG RangeBoost tech moves the signal between pairs of antennas to maximize signal strength and reduce connection drops that hurt your game.
Have the keyboard your way
Gaming desktops let you set the keyboard at just the right angle, and ROG Mothership offers the same freedom. Its keyboard easily pulls away from magnetic anchors and can run wirelessly on 2.4GHz or tethered via USB Type-C. Fast-firing switches put a familiar desktop layout at your fingertips. Personalize the per-key RGB backlighting for different games and load profiles automatically with Armoury Crate.
Ask a question about this item
ID:
Add this to your wishlist
ID:
Save to Existing Wish List
Create a New Wish List