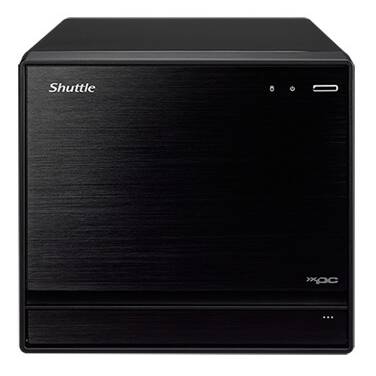 To response the trend of storage and high-end graphics card applications, Shuttle’s XPC cube introduces the new R8 chassis. It is only 1/3 size of a traditional tower PC but can install up to four 3.5” HDDs and support up to 120mm of height graphics card. The new SZ170R8 supports Intel® 6th Generation Skylake LGA1151 95W processors. With Core™ i3/i5/i7 processors built-in graphics, the SZ170R8 is able to support 4k/Ultra HD video playback. Featured with one PCI-E x16 and one PCI-E x4 slots, the SZ170R8 can be installed dual-slot high-end graphics card, surveillance cards, or RAID cards to drive video wall, file server, network video recorder, and more applications. The SZ170R8 is equipped with Shuttle’s I.C.E 2™ heat pipe technology and an 80 Plus Silver certified 500W power supply to maintain long-term and high stability operation for various professional applications. The HDD bracket can install up to four 3.5” HDDs to meet the requirement of storage market. With Intel® Rapid Storage Technology (Intel® RST) and RAID 0/1/5/10 modes, the SZ170R8 is suitable for storage applications such as file server, NAS, and multimedia work station. Set up an 8cm fan in the front of inside case, can effectively remove the waste heat from hard drive to maintain stable and long-term operation.

The all-new graphics card mechanism can support to install up to 120mm of height graphic cards (support to max. size of 280 x 120 x 40 mm)*. It also will bring easier to install a separate graphics card or other expansion cards than ever before and more stable.
* check here for detail

The SZ170R8 is built-in one M.2 2280 with type M and one half-size Mini PCIe slots to install M.2 SSD and a WiFi card, or other compatible device, providing a strong expansion capability.

Use BIOS to set up the Wake ON LAN function so that users can power-on from sleep mode, rest mode, or when powered off via the internet.

Watchdog Timer provides excellent security protection for systems that need to operate continuously for a long period of time. Use Shuttle’s Watch Dog utility to maintain normal operation and stability of the system at all times. The SZ170R8 provides one PCI-E x16 and one PCI-E x4 slots to meet various needs of users. Select the card you want to use, such as multi-display graphic cards, monitor cards, RAID cards, and professional sound cards for video wall, file server, network video recorder, and more applications.

Support three independent screens and dual-screen displays via (2) DisplayPort and (1) HDMI interfaces. Use an adaptor to convert HDMI into DVI or DisplayPort to HDMI or DVI interface for diversified signal selection.

Enter Bios to set-up Power On by RTC function can set system automatic power on. With Windows task scheduler, the system can power off automatically to achieve the goal of saving energy and operation cost.

Shuttle expands the capabilities of its chassis, adding support for Mini-ITX mainboards (17x17 cm or 6.7x6.7 inches). Shuttle chassis goes beyond the Shuttle mainboard so you can easily upgrade to the mainboard of your desire without any modifications to the chassis.

-Windows 7
-Windows 8.1
-Windows 10
-Linux
Ask a question about this item
ID:
Add this to your wishlist
ID:
Save to Existing Wish List
Create a New Wish List